Bundt in the Oven

(Two more days until the Web Splash! All the text to post is here.) 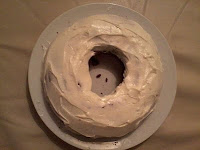 The object you see is not a lifesaver nor a flying saucer... nor a donut. What you see is a Devil's Food Bundt cake topped with cream cheese frosting, baked by yours truly last weekend.

I'm a very experimental cook and loathe to actually follow a recipe. So when something turns out right, I'm ecstatic. In times of excitement, I turn to Twitter. After posting a photo of the my masterpiece, I sat back and waited for the compliments to roll in.

Instead, I got: 'Why is there a hole in the middle?' and 'Why have you baked a giant donut?' When I responded that 'it's a Bundt cake', I was met with tweets of confusion. Being Europeans, these people had obviously never experienced the great Bundt revolution like North America had. Bundts were an enigma.

Although they originated in Germany, the distinctive pan was first trademarked in the States and Bundts rose in popularity in the 1950s after a Bundt cake won second place in a Pillsbury baking content (Wikipedia). Thus began North America's love affair with the Bundt!

Bet you were dying to know that!

Have you ever baked a Bundt?