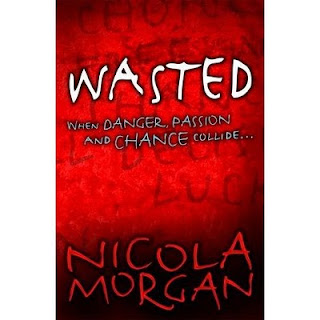 First off, I must say that I don't usually do book reviews because after years of analysing literature for my BA, I'm now much too lazy to really write about other books too critically.

However, when I read Wasted by Nicola Morgan, I actually felt compelled to write about it. There's something so unique about the voice that it's almost hypnotic. It's been awhile since I've read something that drew me in quite like this.

Here's the blurb (from Amazon.co.uk):

Jack worships luck and decides his actions by the flip of a coin. No risk is too great if the coin demands it. Luck brings him Jess, a beautiful singer who will change his life. But Jack’s luck is running out, and soon the stakes are high. As chance and choice unravel, the risks of Jack’s game become terrifyingly clear. An evening of heady recklessness, and suddenly a life hangs in the balance, decided by the toss of a coin. In the end, it is the reader who must choose whether to spin that coin and determine: life or death.

The book moves between Jack and Jess, following them as their lives intersect and twist and turn depending on the flip of Jack's coin. It's a fascinating concept, but what really made this book interesting for me is the omniscient narrator who is so present it's almost like another character, watching and reporting on Jack and Jess' every move and thought. It's creepy and spellbinding at the same time. As the reader, you feel just as much under the control of this narrator as Jack and Jess.

I made the mistake one day of delving into this book before an afternoon nap that I really wanted to take. I never got the nap, but I did finish the book!
Posted by Talli Roland at Thursday, May 27, 2010