Friiiiiiiiday! Phew, I can barely believe it's here. Hope everyone had a good week.

I have finally put the finishing touches on The Pollyanna Plan! I'll be posting more about it on Monday, but in the meantime, if anyone would like a review copy, please let me know in the comments below or email me: talliroland AT gmail.com. It'd be my pleasure to send one over (it will be electronic).

And as I trot off to find my longed for carrot cake, I'm turning the blog over to Sally Clements, a fellow RNA member and writer extraordinaire.

Take it away, Sally!

The thing I like best about being a romance writer is the camaraderie and support of like-minded souls. I’ve been blessed with a great critique group, The Minxes of Romance, and over the past few years as well as critting each other’s work, we’ve become an international group of great friends. We’ve wanted to write an anthology for a long time –we all have a passion for fire fighters, so an anthology featuring strong, wide-chested heros was definitely something we all wanted to do, and BLAZE is the result!

The stories are all set in the Lake District in England, in Coombethwaite, the lakeside town where passions run deep. 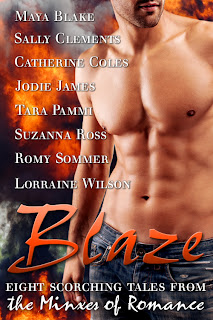 Here’s a bit about it:

BLAZE - 8 scorching tales from The Minxes of Romance.

Romance is in the air for Coombethwaite’s retained firefighters, and none of them will escape its heat unscorched!

A fiery reunion – when Ellie returns after twelve long years to bury her grandfather, the last person she expects to see is her first love, Jake Spencer. One look, one touch and they know memory's flame is as sizzling as ever!

The Fire Inside by Romy Sommer

Fire fighter Sam Redfern is used to being seen as just one of the boys. Until TV talent scout and celebrity Ryan Morgan shows up in Coombethwaite and starts to make her feel very much like a woman. A woman with needs.

A Smouldering Attraction by Suzanna Ross

Shelley Fox is finished with all things romantic. So is Harrison Reid - until he meets Shelley and realises he might easily be persuaded otherwise.

Locked Into Love by Catherine Coles

Journalist Cassie Parker returns to Coombethwaite with her dream in tatters—the last thing she needs is to rely on her ex for anything but on her second day back she needs hunky fireman Ben Spencer to release her from handcuffs!

All alone on her birthday, Wiccan vet Seraphine conjures up more than she bargained for when she casts a Halloween love spell. Five minutes later a knock on the door heralds the arrival of handsome fireman Isaac Quinn, complete with a stray black cat. Is it just coincidence, or has Mother Nature answered Seraphine's request with lightening speed?

Primary school teacher Annabel Jackson knows flirting with the parents is a no-no, but when single father Daniel Walker arrives at Coombethwaite Primary in full fire fighter garb clutching an axe, how can she resist?

Worth the Risk by Tara Pammi

Baker Annie Bennett has always stood on the sidelines while life passed her by. And it has brought Annie nothing but loneliness. With the New Year coming in, Annie decides it's time to come back home, risk her heart with the man she's always loved. Will her risk pay off or will Marcus never see her as anything but his best friend?

A Kindling Romance by Lorraine Wilson

Stressed out lawyer Polly Minton felt trapped in her city job and now she's trapped again, this time in a Lake District chimney; hunky fire fighter and local landowner Drew Reynolds has problems of his own but will he be the one to set her free in more ways than one?

For more about the minxes, visit our blog : http://minxesofromance.blogspot.com/

Thanks so much for having us, Talli!

Blaze is right, I say! Have a great weekend, everyone.
Posted by Talli Roland at Friday, November 30, 2012