As you read this, I will be winging my way north of London to Bedford, a town that will be overrun with romantic novelists this weekend! Oh lucky place!

Instead, Paul Anthony Shortt is taking over my blog for the day. Paul's just released his first novel, Locked Within. Without further ado... over to him!

I want to thank Talli for having me on her blog. While I’ve been busy writing and finding my place in the blogosphere, Talli has been something of a role model, both in terms of her success as an author and as a member of the online community. I am deeply grateful to her for taking part in this blog tour.

Mythology forms the most basic roots of our society. The moment the first humans tried to understand where fire came from or why the wind blew, they were setting humanity on a path that would see us branching out into countless distinct cultures with wide-ranging belief systems.

As we have progressed, we’ve put aside mythology and superstition. Dismissed as children’s stories or just attempts by primitive man to understand the world, myth often misses out on the respect it deserves for shaping us.

The study of mythology profoundly shaped my writing and played an enormous part of Locked Within’s development. There was a specific element which called to me as I thought of the book and what it would be about. The Underworld. The place souls are sent after death. The afterlife, where we finally learn the great mysteries of what our lives have meant. To the ancient Greeks, this required the departed to pay the ferryman, Charon, in order to be taken safely across the River Styx. If they could not pay, due to not receiving proper burial, they were thrown overboard to join the lost souls below.

Ancient Egyptians believed that their soul was made up of five parts, which each served a different purpose and had a different fate after the body had died.

The Norse believed that if they died in battle, they would be taken to Valhalla, where they would fight and feast to prepare for Ragnarok, the end of the world.

The fate of the soul in the afterlife is a core part of every belief. When creating the world of Locked Within, I needed to decide how the inhabitants of the supernatural society felt about death. Two dominant ideologies formed in my mind. One, represented by groups called Conclaves, believed that the soul returned in another incarnation, and so the true essence of the person carried on forever. The other rejected this belief, insisting that while people did have memories from other lives, these were only echoes, imprints, and not the true person. They believed that when a person dies, nothing of that person truly remains, and so they banded together in their fear of death, forming the Council of Chains, which strives to find ways for its members to live forever. Vampirism, body-stealing, the magical preservation of the body, and pacts with powerful otherworldly beings are the Council’s tools. In discarding their mortality, they become predators, driven to live forever while innocents suffer as their prey.

Has mythology ever inspired your writing? Or have you read stories from myth that resonated with you as strongly as the best novel or movie? 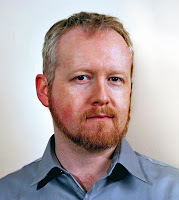 A child at heart who turned to writing and roleplaying games when there simply weren't enough action figures to play out the stories he wanted, Paul Anthony Shortt has been writing all his life. Growing up surrounded by music, film and theatre gave him a deep love of all forms of storytelling, each teaching him something new he could use. When not playing with the people in his head, he enjoys cooking and regular meet-ups with his gaming group.He lives in Ireland with his wife Jen and their dogs, Pepper and Jasper. Their first child, Conor William Henry Shortt, was born on July 11th, 2011. He passed away three days later, but brought love and joy into their lives and those of their friends. Jen is pregnant again and is expecting twins.
Website: http://paulanthonyshortt.blogspot.com

Thank you for the kind words, Paul! So... tell me. Has myth inspired your writing? Have a great weekend, everyone. I'll be back Monday with a full report on my weekend of lurve.
Posted by Talli Roland at Friday, November 16, 2012