Happy Wednesday! Before I hand over to Michele Gorman to talk about leg hair (it keeps you warm, you know), a small announcement: my story 'Miracle at the Museum of Broken Hearts' is out now in Madness under the Mistletoe, which you can buy for $2.99 from Amazon and other ebook vendors now. Yay!

Right, now over to Michele. Michele is the author of Single in the City, a book I flew through and greatly enjoyed. It's recently launched in the US, and I highly recommend it for a fun and fresh read.

National identity is a bit like leg hair in wintertime. We’ve got no reason to notice it unless it’s about to go on display.

When I moved to nearly 15 years ago, I had no choice but to show my legs, metaphorically speaking. Being a newly landed American here, everyone noticed.

This surprised me at first. After all, we speak the same language, watch British films and read British books. We follow the same fashion trends and like the same food. Don’t we?

Well, no. The differences were stark. They were immediate. And they tripped me up at every turn.

It wasn’t only my accent or word choice. I failed even at non-verbal tasks. Thanks to the British compulsion to walk on the left I risked knocking foreheads with everyone I tried passing in the street. We’d meet, shuffle right, look embarrassed (me) or angry (them), meet, shuffle right, repeat, till one of us hit the building or fell off the kerb. There was no doubt that I wasn’t a Londoner.

And when I did open my mouth, well, the simplest of conversations were fraught with misunderstanding. Not only did I speak in American at a decibel level that startled listeners, I often had entire conversations in which neither participant had any idea what the other was talking about. I once spent 20 minutes trying to understand why my friend suggested wearing a vest under a blouse, while she tried to understand why I’d wear it on top … Vest in American is a waistcoat in English. Vest in English is a string top/camisole in American. These nuances got me every time, sometimes with with humiliating consequences. Are you starting to see a theme here? Want to know my most humiliating moment? Oh all right then. Soon after I arrived I volunteered for a charity walk at work, which included goody bags full of useful stuff. I pulled out one item, announcing gleefully (and at full volume), "Wow, I really need a fanny pack!" That got the attention of the 100 or so traders in my office. British friends, you'll be sniggering already. American friends, "fanny" means, er, lady parts. I’d just broadcast my need for a good, ehem, packing. Incidentally, the traders’ responses needed no interpretation.

These were daily reminders that I was different to the inhabitants of the city I’d chosen to call home. Which caused me to think a lot about my identity. Was I an American living in the ? Well yes, certainly at first. I identified with . was alien. But as years passed and I decided to make my home for the future, I started to think of myself as British too. In 2006 I became a dual citizen, swearing oath to Queen and country yet still welling up at hearing The Star Spangled Banner.

Now I can (almost) speak both languages and walk without risk of concussion. I understand cricket as well as football, which is to say, not very well. I rail at the politicians in both countries and have introduced pumpkin pie to my baffled friends. I guess that makes me a Britamerican. 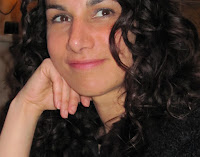 Michele Gorman’s debut novel, Single in the City, follows the misadventures of 26 year old American Hannah, who lands upon ’s gentle shores with no job, no friends and no idea how she’s supposed to build the life she’s dreaming of. Armed with little more than her enthusiasm, she charges headlong into , baffling the locals in her pursuit of a new life, new love and sense of herself. You can buy the novel on Amazon and Barnes and Noble. Michele is on Facebook and Twitter, too.

Thank you, Michele. That fanny pack thing makes me laugh every time! Have a great week, everyone. I've been slaving away on edits and I hope to stick my head above the parapet soon.
Posted by Talli Roland at Wednesday, November 02, 2011