Hello, all! Welcome to my new posting day -- Thursday! From here on in, I will be posting each week on Thursdays, except for any guest posts I have already scheduled. 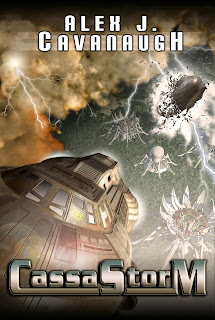 And today, I'm thrilled to be taking part in Alex Cavanaugh's launch of CassaStorm. Comment on Alex’s blog this week for a chance to win a Cassa mug, mousepad, magnet, and swag.

As part of his launch, Alex invited everyone to ask him a question. I asked: Is there more than one Alex? How on earth do you manage to get everything done?

(Alex is a human blogging dynamo! Here is his answer.)

Talli, do you need to borrow my cloning machine?

Just me! I guess I just make certain things a priority and they get done no matter what. I just decide that I’m going to do it.

Here is more about his book:

From the Amazon Best Selling Series!

A storm gathers across the galaxy…

Commanding the Cassan base on Tgren, Byron thought he’d put the days of battle behind him. As a galaxy-wide war encroaches upon the desert planet, Byron’s ideal life is threatened and he’s caught between the Tgrens and the Cassans.

After enemy ships attack the desert planet, Byron discovers another battle within his own family. The declaration of war between all ten races triggers nightmares in his son, threatening to destroy the boy’s mind.

Meanwhile the ancient alien ship is transmitting a code that might signal the end of all life in the galaxy. And the mysterious probe that almost destroyed Tgren twenty years ago could return. As his world begins to crumble, Byron suspects a connection. The storm is about to break, and Byron is caught in the middle…

“CassaStorM is a touching and mesmerizing space opera full of action and emotion with strong characters and a cosmic mystery.” – Edi’s Book Lighhouse

Alex is one of the most supportive bloggers around, and I wish him the best of luck with his new novel!

And with that, I am off to Broadstairs on the ocean for a mini-break! Although the weather is definitely on the cool side, as long as the rain holds off, I'll be happy. I shall be back next Thursday with plenty of photos, including Baby TR's first glimpse of the sea.

Have a great week!
Posted by Talli Roland at Thursday, September 19, 2013