Whoop! It's Friday! And as you read this, I am winging my way up north to York. So it's a good thing that I have the lovely, Montréalicious Cat Lavoie here today, covering for my absence.

Before turning the blog over to her, I want to say a huge apology to several bloggers whose comments I found trapped in my spam filter. I haven't been ignoring you -- I just didn't know you were there!

Thanks for having me, Talli!


Today, I wanted to talk about the challenges of being a writer. But instead of focusing on how hard it can be to find time to write or how I have panic attacks when—after reading a draft for the twentieth time—I still find sneaky typos, I wanted to chat about the particular challenge of writing… with a cat on your keyboard.

I've been accused of being a crazy cat lady and I embrace that title with open arms. Besides, I think you need to have at least ten cats to qualify as a real crazy cat lady. And I only have one. Her name is Abbie and she does not support my writing career. In fact, I think she's actively trying to force me into early retirement. Since I spend most of the day at the office, I should give her all my attention when I get home, right? Sadly, that's not always the case. 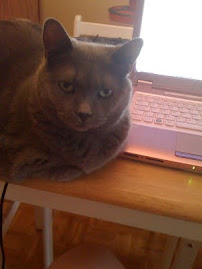 When I adopted Abbie from a shelter ten years ago, she was already five years old and set in her kitty ways. I don't think she had a clue that she was being adopted by someone who spends most of her free time staring at a computer screen and having animated conversations with imaginary people who live inside her head. A crazy person, basically.

So what does Abbie do to get my attention? She takes my computer and my notes hostage.

When she eventually falls asleep, I scoop her up and whisk her over to her favourite chair before she even has time to open her eyes and realize that she has fallen asleep on the job.

Sometimes she'll have a change of heart and try to reward me for all my hard work. Just the other day she caught a bird in our backyard and tried to bring it back inside the house. Thankfully, he was able to escape her grip. The bird was meant to be a present for me, surely, and not a warning of what will happen if I ignore her for too long.

Even though she sometimes makes it hard for me to focus on writing, Abbie is—by far—my favourite distraction. There's nothing better than days when she doesn't feel like fighting me and will fall asleep next to (and not on) my computer. The soft rumblings of a happy—or resigned—kitty is like music to my ears.

Just don't tell her that I'm working on a second novel.

When twenty-seven year old Roxy Rule’s best friend and roommate accepts a glamorous new job overseas, she expects their relationship to continue as it’s always been—carefree and easy—until they share a heart-stopping kiss moments before his departure. Overcome with mixed emotions, she fights the urge to over analyze the situation and resumes back to her normal life in New York City, working for an intolerable boss at a dead end job, creeping further and further away from her own dreams of becoming a professional chef. While things become more complicated between her and Ollie, Roxy is sure that nothing can come between two lifelong best friends—not even mild jealousy over a thriving career or a silly little kiss that meant nothing. In fact, it was such a meaningless and forgettable kiss that she convinces herself that it’s not even worth mentioning to her fiancé, although it is all she can think about. Roxy’s already topsy-turvy life only gets more complicated when her sisters Steffi and Izzie suddenly become her roommates. Steffi is six months into a pregnancy she refuses to discuss and Izzie is in the throes of a premature midlife crisis. Roxy tries to take control of her career, her love life and her sisters – but can she really handle it all? And can the Rule family keep it together – or break under the pressure?

Thank you, Cat! You can purchase Cat's novel on Amazon here. Have a great weekend, everyone.
Posted by Talli Roland at Friday, September 07, 2012