I Do It All for the Water Vole

Happy Tuesday! I don't usually post on Tuesday, but today I'm happy to do so for your friend and mine, the water vole.

A special edition of Heather McCorkle’s The Secret Of Spruce Knoll is releasing from Compass Press this month and she’s doing a special tour to go along with it. The special part, a percentage of the proceeds from every special edition sold (in every format) between its release date and 12-12-2012, will go toward Heather’s favorite charity that protects endangered species. Her goal is to make at least $10,000 for the charity. 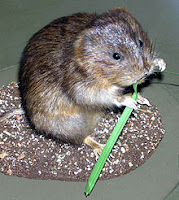 Heather: As you know, but many of my yank friends may not, the European water vole is protected by the United Kingdom. These adorable creatures are extremely short-lived. Whether in captivity or the wild, they tend to die after only two years. Now that's a lifespan that requires a bucket-list early on!