Everyone Says I Love You... Except to Me

It's Friday! I don't even know where this week has gone, but I'm happy to report I'm slowly catching up on things, phew.

Today, I'm pleased to have the wonderful Cally Taylor on my blog. Cally's second novel, Home for Christmas, is due out shortly. I've recently finished it, and it's a fantastic, heart-warming, perfect holiday read with characters everyone can easily relate to. I'd definitely recommend it.

Everyone can remember their first kiss and most people, unless they were particularly drunk, can remember when they lost their virginity. But how about the first time a boyfriend or girlfriend said 'I love you'? How old were you? Fifteen? Eighteen? Twenty? Older?

I had to wait until I was twenty-three to hear those precious three little words for the first time. It wasn't that I hadn't had boyfriends - I'd had three by that point, but none of them had ever told me they loved me.
First was Casper*. We were 15, at different boarding schools and would sneak out at night to meet on the Malvern Hills for elicit snogs. Casper was astonishingly handsome and very intelligent but when he sent me a beautifully eloquent letter over Christmas holidays, telling me how much he enjoyed our time together, I freaked out that he was getting too 'heavy' and finished things. He never said‘I love you’ (hardly surprising considering..).

Next up was Jake. I was 18 and spending my gap year sharing a house with a bunch of strangers in Worcester while I did a secretarial admin course. He was a friend of one of my housemates - 23, a chef and rode a motorbike. I fell hard and fast and so, it seemed did Jake, initially at least but as we approached the fateful 3 month mark (what is it about 3 months and make or break moments in relationships?) he started to pull away. When he finished with me he said it was because I was going to uni that autumn and he didn't want to get hurt. He never said I love you.

My third relationship was with Ben. I was 21, had spent my 3 years at uni single (apart from the odd dalliance) but was still hanging around Newcastle, helping out at Drama Society while I tried to get a job. Ben was a second year stats student who was in the Music Society with a friend of mine. She was convinced we were perfect for each other and set us up on a blind date. We got on stormingly and were together for 3 months (there's that time frame again!) when Ben decided to give up his course, move back to Sussex and wave goodbye to our relationship at the same time. He never said I love you.

Not long after Ben and I split up I moved to London and got a job. The years rolled by and, before I knew it, I was nearly 23 and still hadn't heard those three little words. How come everyone else I knew had been told 'I love you', but not me? Just like Beth in my novel 'Home for Christmas' I started to worry that maybe there was something intrinsically unlovable about me.

So, what would you think if I told you that the Internet was directly responsible for me FINALLY finding love just a couple of months after my 23rd birthday? Would you judge me if I told you I flew to the Netherlands, without telling anyone, to spend the weekend with 20 year old Frank, a man I'd only ever talked to online? And that, 48 hours after we first hugged hello, he told me he loved me (and I said it back)? And that he spent Christmas with my family and we dated for nine whole months before I realised that...
But that’s another story!

How about you tell me about the first time you were told 'I love you' instead...
*All names changed to protect the guilty innocent

Talli says: How's that for a cliffhanger? I want to know more about Frank! Thank you, Cally. Here's more about Cally's book: 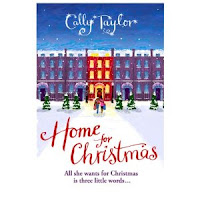 Beth Prince has always loved fairytales and now, aged twenty-four, she feels like she's finally on the verge of her own happily ever after. She lives by the seaside, works in the Picturebox - a charming but rundown independent cinema - and has a boyfriend who's so debonair and charming she can't believe her luck! There's just one problem - none of her boyfriends have ever told her they love her and it doesn't look like Aiden's going to say it any time soon. Desperate to hear 'I love you' for the first time Beth takes matters into her own hands - and instantly wishes she hadn't. Just when it seems like her luck can't get any worse, bad news arrives in the devilishly handsome shape of Matt Jones. Matt is the regional director of a multiplex cinema and he's determined to get his hands on the Picturebox by Christmas. Can Beth keep her job, her man and her home or is her romantic-comedy life about to turn into a disaster movie?

‘Home for Christmas’ by Cally Taylor will be published by Orion paperbacks on 10th November and is available for pre-order from Amazon.co.uk now. Cally can also be found on her blog, Facebook, Twitter or website.

Have a great weekend, everyone!
Posted by Talli Roland at Friday, October 28, 2011