I Am Not a Girl

Happy Friday! I'm delighted to report I've had no more rat-biting-kitten dreams, but the insomnia does seem to have sunk in its teeth a little further. I've been awake since 3 a.m., wheeeeeeeeee!

Ahem. So, I'm delighted to welcome Aussie author M.J. Hearle to my blog, who very obviously is not a girl. Read on for more.... over to you, MJ! 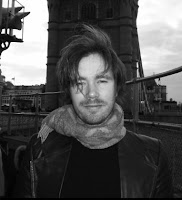 Firstly, thank you so much to the lovely Talli for letting me borrow her blog for the day. I promise to return it promptly and in the same condition it was given (those scratches were there beforehand...honestly!)

Secondly, I’m going to take this opportunity to make a startling confession – I am not a girl. Yes, I know my first novel, Winter’s Shadow is a Paranormal Romance, a genre typically dominated by female writers. Yes, the story is told almost entirely from the perspective of a teenage girl and it’s true M. J. could stand for Mary Jane, (it was in fact the intention of my publisher to obscure my gender) but I would like to state for the record that I am absolutely, positively not a girl.

Michael James Hearle is a man...or a thirty-one year old boy, depending on who you speak to.

Being a man, and concerned with such manly things such as football and cars, one might think it was difficult writing a novel from the perspective of a teenage girl.

One would be right.

Unfortunately, the story that had popped into my head, the story that was making it difficult to sleep at night, demanded to be told in a seventeen-year-old girl’s voice. A girl named Winter Adams. Somehow I had to find that voice, but what did I know about teenage girls? Sure, I’d been through high school with a bunch of them, but I didn’t understand them then and age certainly hasn’t improved my understanding of these mysterious creatures. So, I decided to take a different tact.

I didn’t know anything about sensitive teenage girls, but I did know a fair bit about sensitive teenage boys – I would write Winter as though she was a boy. Winter became me – or a version of me, with alternate plumbing. Once, I’d finished the book I gave it to the three most significant women in my life – my mum, girlfriend and sister – to see if I’d succeeded or if I’d completely missed the mark. The feedback from all three was that Winter felt pretty authentic, however some of the finer details in my characterisation needed tweaking. Here’s a few of the notes I received:

• Middle-aged women in the fifties might have gone to bed wearing facemasks and cucumbers over their eyes, but seventeen year old girls generally don’t. They also don’t get to bed with rollers in their hair.

• Girls don’t just sit around talking about boys and shoes. They can discuss other topics such a music, movies, television, and politics. They probably wouldn’t discuss who won the football on friday night.

• Not all girls love Sex in the City (though most do) and even if they do, it’s doubtful they would refer to themselves as a ‘Samantha’, ‘Carrie’ etc.

• Girls don’t refer to themselves as ‘chicks’.

Tired of the same old glittery vampire and shirtless werewolf stuff, I crafted an entirely new supernatural mythology for Winter’s Shadow. I invented a whole other world, new creatures, new rules, and while coming up with a fresh take on a well worn genre was pretty tricky, I can honestly say it wasn’t half as hard as writing a believable teenage girl.

It’s no coincidence that my next book will be about a thirty-one year old man who likes watching television and eating nachos.

But Blake isn’t all that he seems. There is a strangeness about him, something dark and otherworldly. Something dangerous. In his attic is a secret he would kill to defend, but Winter seems to have a special ability to make him forget his duty. And he is her only protection against the gathering darkness.

The only problem is, to protect Winter, Blake must risk exposing her to an even greater danger.