Ah, rejection. You gotta love it -- if only because it gives you a valid reason to mope about and bemoan your life, then have yet another glass of wine. No matter what stage you're at as a writer, rejection is a part of life.

My first rejection came in 1989. Sadly I was too young to drown my sorrows but I'm sure that didn't stop my adolescent snark when publishers turned down my masterpiece. Inspired by Gordon Korman, a Canadian teen who published best-sellers, when I was eleven I started my novel about a girl who wanted to become a champion diver. She would defeat all the odds -- overcome her half an arm (don't ask) -- and win the gold.

Typing away on the trusty Commodore 64 during the hot summer months, the novel began to take shape. My interest dwindled when school started, though, and the project languished until a year or so later when I got a second wind and decided to finally finish it. Sixty pages later, Glint off the Gold was born.

I have to laugh reading it -- it's quite a morbid tale. Anne ends up dying of cancer and her best friend also gets run over by a car (ironically, a drunk driver, too. I thought that was a nice touch).

Full of enthusiasm to have finished my 'fictional only' story, I was sure it would get published, no problem. Who wouldn't want to read such an uplifting tale (har har!)? I looked in my favourite books and decided to send it away to Tyndale House Publishers (a Christian publisher -- I thought they might be nicer). I printed out the whole thing, shoved it in an envelope and sent it off.
A year or so passed and I'd pretty much forgotten about the whole thing until I got a letter in the post turning down my offering. 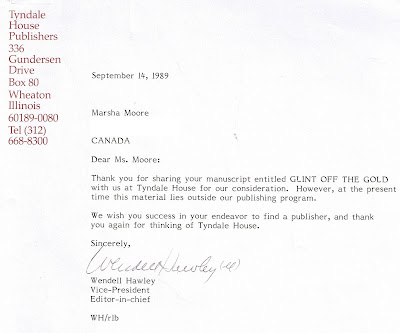 It's only now that I actually appreciate the response from the Vice-President and Editor-in-Chief (his assistant, or whoever took pity on me). I had no self-addressed envelope and no covering letter, yet they responded anyway.
And thus, my love of affair with rejections had begun. Now, where's my wine?
Posted by Talli Roland at Wednesday, August 18, 2010

Email ThisBlogThis!Share to TwitterShare to FacebookShare to Pinterest
Labels: rejections