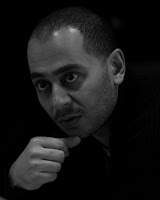 Since I enjoy snooping and stalking, I also love getting glimpses into people's private lives. So today, I offer you ten things about Mr Talli Roland. Mr Talli Roland would probably die if he knew I was doing this -- thankfully, he does not nor hopefully ever will read this blog. Or my Facebook page. Or Twitter.

1. Mr Talli Roland was born in Algeria to Egyptian parents, then moved to Egypt when he was young. He worked in Saudi Arabia for a year or so, nearly getting his head chopped off due to his atheistic beliefs (slight exaggeration, but he did flee the country in a rather unorthodox way). When he was in his early thirties, he moved to England.

2. Mr TR is a medical doctor but during his early practice, he attended the National Film School in Cairo, where he learned to be a film director.

3. Mr TR is a killer cook and can make roast chicken, dolma, and coconut cookies to rival anyone, even his Mama (but don't tell her I said so). He is also an extremely prolific rice cooker and is well known for his 'mountain of rice'.

4. Mr TR wrote and directed a 90-minute feature film called Anaphylaxis recently at the legendary Ealing Studios. The film was shot entirely on green screen and Mr TR painstakingly taught himself special effects and recreated sets. Yes, it took years. Mr TR now has a bad hip from sitting in one chair for so long.

5. Mr TR cannot stand an empty glass sitting on any surface for longer than ten seconds once it touches said surface.

6. Mr TR has also studied philosophy, has met the Queen, and has a brother who is a judge in the Supreme Court of Egypt.

7. Mr TR is a crazy driver. I shut my eyes and hope for the best.

8. Mr TR has a very lovely 17-year-old daughter who is super clever and recently got all manner of A's and A*'s on her GCSEs.

9. Despite having English as his second language, Mr TR thinks his English is better than mine. Mr TR is wrong.

10. Mr TR is the one who encouraged me to think seriously about my writing and the one who kicks me in the butt when I need it!

So there you have it! Ten things you never wanted nor needed to know about my husband!

Email ThisBlogThis!Share to TwitterShare to FacebookShare to Pinterest
Labels: Ten for Tuesday