If Polygamy Was Legal... I'd Be Marrying Cade 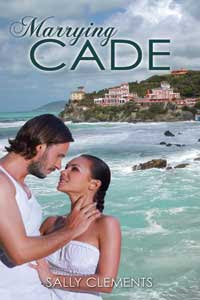 It’s launch day for the lovely Sally Clements’ new book, Marrying Cade, and to celebrate, she’d having a Mexican wave of excerpts! (For those you not familiar with the 'Mexican wave' -- I admit, the term did throw me when I first moved here -- it's just like a wave you start at ball games and such.) You can keep up with the wave’s progress on the twitter hashtag #MarryingCadeWave – and add a tweet with the hashtag to chat with everyone else who’s reading along.

I'm halfway through Marrying Cade and phwoar, it's a great steamy read. Sally's done a brilliant job evoking the feeling of an Italian island and I really feel like I'm there when I'm reading.

To follow along, just call in to these blogs to read each excerpt (they start at stop one, and finish at stop ten). Alternatively, start wherever, and click on the next stop link at the bottom of the excerpt. Or just click on the buy link to get your own copy of Marrying Cade!

The last thing Cade West felt like doing was mingling with a bunch of bright young party guests. His eyes stung at the unaccustomed Tuscan sunlight, and his body ached from contorting his long frame into a plane seat. The irony of hating long distance flights wasn’t lost on him. After all, he spent most of his life jetting between hotels. But he wasn’t made for an airline seat. Even a first class one.

This week was going to be all about love and happy-ever-afters. A forced break from his regular routine which, if he were honest, he could well do with. He was exhausted after the tedious routine of back-to-back meetings, and on-site consultations. People thought his life as owner of The West Group was glamorous, but the day to day reality was anything but. His managers were paid way over the odds; they could handle things for a couple of weeks. For the first time in over a year he was on holiday.

His best friend Adam was getting married. Moving to Isola dei Fiori, working for his father-in-law, and putting his life and hope of happiness in Rosa Bellucci’s hands. There wasn’t a woman alive Cade would change his life for. Getting married meant staying in one place, settling down, putting down roots. He’d had roots once, snaking through the earth of his native Texas, gripping firmly in the land that had been his family’s for generations. Cade rubbed the side of his face with the back of his knuckles. No point going there.

Get your own copy here: Amazon.com, Amazon.co.uk, The Wild Rose Press

Before you go on to stop two, do click the tweet button below to help get the wave going! Now, continue on to Stop Two, here!