Happy Wednesday, everyone! Today, I'm delighted to have Steve Stack (aka Scott Pack) here to talk about his new book, 21st Century Dodos. Scott is the publisher of The Friday Project (HarperCollins) and also blogs over at Me and My Big Mouth. Dodos provides a look at extinct or soon-to-be-extinct aspects of the British way  of life, and as someone who hasn't grown up here, it's fascinating.

Before I turn it over to Steve, just a quick link to give you: yesterday, I was over at The Writer's Guide to E-Publication, wondering about the divide in sales between Amazon.com and Amazon.co.uk. Pop by if you get the chance!

And now, over to Steve! 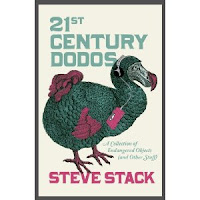 The lovely Talli has invited my on to her blog but on the condition that I mention shoes.
I should probably explain. A couple of weeks ago there was a bit of a debate on Twitter about some press article or other that dared to suggest that all women’s fiction, the author probably called it chick lit, was about shopping and shoes. Quite rightly, Talli and other writers of fiction aimed at a female audience were up in arms and keen to point out that the genre, such as it is, covers the whole spectrum of human existence and isn’t just about shoes and shopping.
And then I piped up to point out that shoes do actually get mentioned quite a lot.
Which is why I have to mention shoes while I have here. I have now done so twice.
Hopefully that now buys me a few paragraphs to plug my new book. A book, I hasten to add, which contains not one mention of footwear. It does have 134 entries on other things though. It is a collection of (hopefully) humorous pieces about the many inanimate objects, traditions, experiences and other stuff that are in danger of becoming extinct. I call them, and the book, 21st Century Dodos.
Given that Talli is someone who has come to our shores from abroad and has adopted the UK as her home, I thought this entry about the playing of the national anthem in cinemas might be quite apt.
Talli, you must stand until the end of this blog post.
---
Right up until the late 1970s, the national anthem was played at every screening in cinemas up and down the land. Patrons were expected, but not actually forced, to observe the anthem by standing throughout. Originally, it would have been played at the end of the film, but that tended to lead to a frantic rush for the exits while the credits were rolling (if you’ve ever seen that Dad’s Army episode, then you’ll know what I mean). It was later moved to the beginning so that unpatriotic scallywags would be immediately identifiable by their insistence on staying seated. Cue lots of tutting from older cinema-goers.
I am guessing that the tradition came to an end when the number of people sitting through the anthem far outnumbered those standing to attention. Or perhaps when multiplexes started popping up in out-of-town shopping centres. Or when most people stopped giving a tinker’s toss about royalty and the fine heritage of this great nation. Whatever the reason, it doesn’t happen any more.
---
See? Fascinating! Thanks, Steve. If you'd like to follow along on the blog tour, yesterday Steve was here and tomorrow he'll be here.
What disappearing aspect of your culture/ daily life would you like to hang on to?